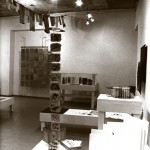 Organiser of the Exhibition: Circle “Bokartas”.

In Lithuania Artist‘s Book Exhibitions were initiated and organized in the last decade of the 20th century, when Lithuania restored her independence, left the formation of the USSR and regained freedom.

While organizing the “1st international Artist‘s Book Triennial Vilnius 1997” in 1997 in Vilnius in the capital of Lithuania, I wanted to „raise“ the exhibitions artistic level by inviting foreign artists. I took it as important to make this event one of the biggest significant artistic events in Lithuania, about which the whole world would hear. It had to be cyclic and awaited not only by the artists, but also by the viewers.

65 artists from 13 European countries participated in the 1st international Artist‘s Book Triennial Vilnius 1997. In this exhibition 105 artist‘s books were exhibited. The theme of the 1st International Artist‘s Book Triennial Vilnius 1997  – “Diary: Eight Days”. The idea is that eight days is seven plus one. According to the Bible, the world was created in seven days. Isn‘t it us who live on the eighth day and us who are going to destroy this wonderful world only in one divine day?