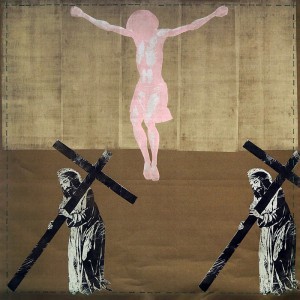 Over several decades, Kestutis Vasiliunas has been established within and outside the local arts context of Lithuania, being well-known and appreciated as an original artist creating by the means and techniques of graphics, as well as showing interest in other fields and interdisciplinary expression. The artist has arranged numerous exhibitions featuring his large-format prints, pieces of painting and installation, for the creation of which he has been employing rather archaic techniques of wood carving; he is also celebrated as a maker and promoter of an “artist’s book” who is actively engaged in representing author art books both in Lithuania and on a worldwide scale.

Kestutis Vasiliunas is an artist whose oeuvre lends itself to a multifaceted analysis, as it contains multitudinous cultural and multicultural layers, as the artist’s work relays a distinct non-conformist attitude making his creative production stand out against the sometimes straightforwardly perceived, commonplace or merely “beautiful” context, the tradition of a trivial understanding of an artist’s mission.

The artist is among a few in Lithuania, consistently employing genuinely archaic woodcarving techniques, making carvings in a large-scale format, combined structure, depicting complex and, at the same time,  simple plots (printed from the cliché on the canvas using the most ancient and reliable technique, that of the spoon).

Seeking to emphasise idiosyncratic and unique character of the artist, it must be said, in the first place, that he is a highly positive person who shuns both ethical and esthetical compromises, banality, that the artist is vociferous against aggressive and well-disguised commercialism, institutionalism, homogenization, levelling and uniformity of the arts, the craving to cater to any fads, trends, current intellectual and political manifestations.

The creative work of Kestutis Vasiliunas incorporates images for which the artist invokes manifold sources of inspiration, iconography from different cultures, civilisations, and epochs, by juxtaposing routine impressions, impressionistic images from travels on which, now and then, glance and thought are focused (iconographic images and plots embrace impressions from the travels in Italy, China, South Korea and many other countries) with interpretations of fragments of classic artworks, cues and replicas, rebuses or puzzles of the word-image interplay.

In his works open to multiculturalism, calling for the need of moral dispute, the artist remains in a continual pursuit for identity in the context of the Christian world and practice, emphasising the importance of the Christian outlook, morality, ethics, attitudes, and discourse, posing pressing questions and challenging the contraposition between the officially declared morality and manifestations of brutality and aggressiveness in the modern world. 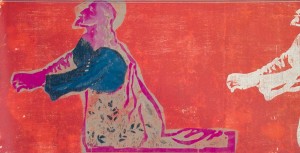 Pursuing the search for the Christian identity, staying on the road of self-quest  for God, the artist keeps going back to the Holy Scripture, images and iconography of religious works of the old masters, thereby producing original interpretations of the chrestomathic controversial relationship between the Gothic and Early Renaissance symbolic meanings and contemporary realia.

The composition of the works by Kestutis Vasiliunas is based on the principles of duality; his carvings are most commonly composite made up of two contrasting component parts. In his large-sized chromatic wood engravings, the artist invokes and provokes cultural-ethical oppositions, paradoxical controversial images. The images, put in a paradoxical juxtaposition, exist in a sort of “temporal vector”, imaginary cultural, ethical space, in a combined consciousness and mental identity milieu by underlining the necessity of moral and ethical idea, perception and self-cognizance.

The artist creates a kind of a story inside a story replete with intensity, psychologised associative “dramaturgy”.

Thereby, images and cues, as if originating from completely different epochs and worlds, come into being in the works of the artist.

The Gothic representation of the Crucifixion finds itself in the same “cultural and mental field” with a hangman from a Goya drawing and a “flabbergasted” hare from a Dürer engraving, and Christ carrying the cross amidst yellow taxicabs… 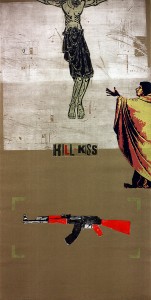 …The Crucified “exists” within the same mental field alongside the images of park idyll painted by Sisley, simple floral arabesques, the story of Christ entering Jerusalem, supplemented with the characters of the Chinese folklore, a Chinese terracotta warrior juxtaposed with the military pictorial clichés of the 20th century; while the painting “Kill-Kiss”, with Judas by Giotto, the Crucified and a menacing machine-gun, makes one startle and think again and again in what world we are living, what changes and what does not in this world, makes one ponder over whether a human being is capable to resist a brutal routine and continue on the path of search for spirituality and true values…
Sometimes Kęstutis Vasiliūnas “succeeds” in constructing a truly sophisticated modern religious picture, an icon, where one can feel the hand of Guardian Angel leading innocent children souls, all this being watched by the holy image of Our Lady of Shiluva (it was in Shiluva where apparition of the Blessed Virgin Mary occurred for the first time in Europe, now attracting huge crowds of pilgrims, and being the site for annual celebration of devotion feast).

The nature morte cycle also obtains the status of religious image, where still life pieces from Gothic paintings of the Last Supper are fragmentarily reproduced. Though minimized, abstracted, non-illustrative, the artist succeeds in creation of the ambience of a sacral and important message, he manages in making everyone reflect upon who we are, where we are heading, reminisce the Christian parable – Ecce Homo.